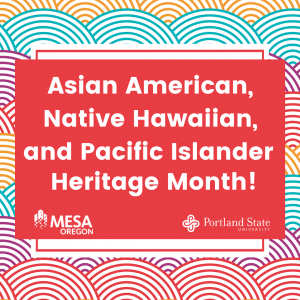 When it comes to STEM contributions of the AANHPI community as a whole, Pacific Islanders, Native Hawaiians, and Southeast Asians are often underrepresented despite making important contributions to science and technology, often rooted in indigenous knowledge. Some of these remarkable STEM heroes include:

Roseli Ocampo-Friedmann Ph.D. – a Filipino & American scientist best known for her research on extremophiles, organisms that survive and inhabit extreme conditions. Her work has been cited in work exploring the terraforming of Mars.

Nainoa Thompson – a Native Hawaiian navigator. He practices the traditional art of wayfinding–how early Polynesian voyagers found their way across oceans by using cues from the sun, moon, stars, clouds, and waves. “Native Hawaiian master navigator Nainoa Thompson became the first to practice it again when he combined traditional wayfinding principles and modern science to develop the star compass, a conceptual direction system, in 1980.” Source: IdeasTed.com

Kamuela Yong Ph.D. – an associate professor of mathematics at the University of Hawai’i–West O’ahu. He is the first Native Hawaiian to earn a Ph.D. in applied mathematics and his research interests include mathematical modeling of biological, ecological, and epidemiological systems using diffusion. He is a co-founder of Indigenous Mathematicians

We continue to be saddened about the racism and hate faced by the AANHPI communities in recent years. Not only does MESA stand against that, we also stand for the cross-racial solidarity needed to break down the systems of oppression that inhibit the liberation of all communities of color.